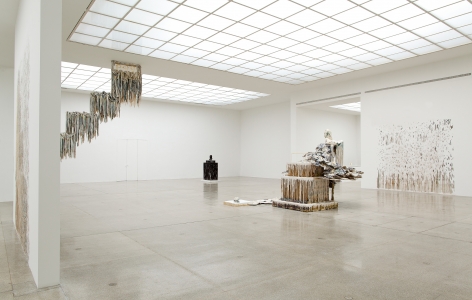 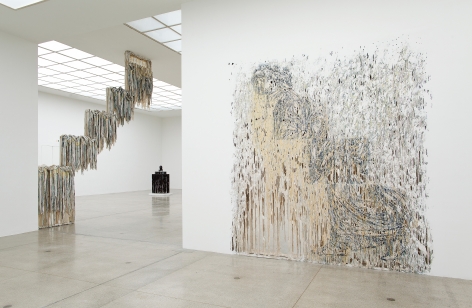 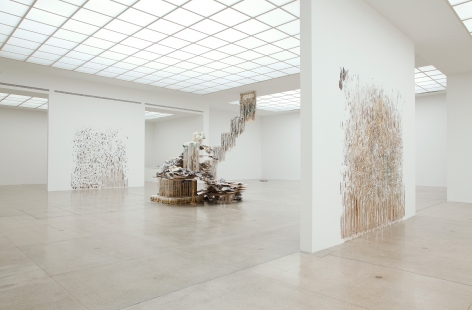 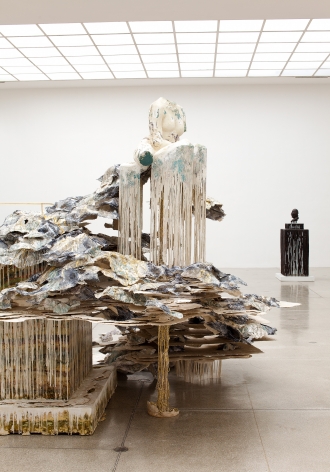 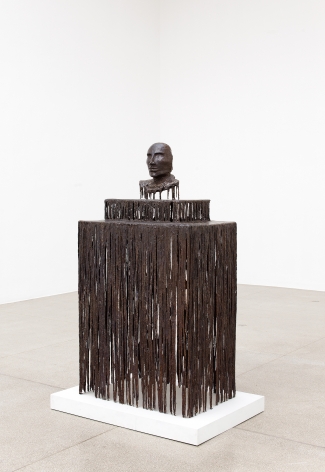 Diana Al-Hadid’s sculptures, drawings, and panels merge figuration and abstraction. Her art involves a wide range of materials—from steel and fiberglass to gold leaf and pigment—and spans different eras by making reference to historic models or integrating them into its architectonic structures.

At the Secession, Diana Al-Hadid presents her most recent ensemble, The Fates, which comprises large sculptures and two inset panels for which she took inspiration from classical sculpture and European— more particularly, early northern Renaissance—painting. Her three-dimensional interpretations incorporate architectonic structures and compositions grounded on basic geometric forms as well as landscapes and figurative motifs from these masterpieces. The artist employs traditional sculptural practices in experimental fashion, often by shifting elements back and forth between flatness and spatial depth, toying with proportions and scales, and exploring the limits of gravity in constructions that seem to defy it. The sculpture placed at the center of the gallery, Phantom Limb (2014) for example, appears to hover between construction and decay. Ascending like flights of stairs and falling apart at the same time, its platforms are caught in a moment of fragile balance: everything seems afloat and in motion.

Diana Al-Hadid’s works result from an open creative process. Her revisions and reconfigurations toe the fine line between fidelity to the historic sources and a more liberal recasting:

“These references do not always remain perfectly intact, sometimes I lose the trace altogether, but a small gesture remains. (…) What I have learned from starting with these paintings is that so little is needed to suggest a character or a scene, such is our familiarity with the tilt of Mary’s neck for example. Other times, the scene is obscured and what remains is a few faded arches of an architectural compound that once was highly detailed and populated. I am interested in how much an image can be ‘stressed’ before it begins to forget its origins.” (Diana Al-Hadid)

The two free-standing wall panels in the exhibition, Still Life (2014) and Sleep Walker (2014), which are viewable from both sides, are similarly paradigmatic examples of this approach. The motif of the first, a woman stuck in a mountain, is drawn from the painting Allegory of Chastity (1475) by Hans Memling, while the architectural structure of the mountain resembles Pieter Bruegel’s painting The Tower of Babel (1563). As a counterpart the second panel is based on an ancient relief of a woman walking who was identified around 1900 as Gradiva.

The character of Gradiva, the “woman who walks through walls”, is an invention of the novelist Wilhelm Jensen (Gradiva: A Pompeiian Fancy, published in German in 1903 and in English translation in 1918). She became famous through Sigmund Freud’s analysis of the novel (Delusions and Dreams in Jensen’s ‘Gradiva,’ 1907) and was subsequently adopted by the Surrealists as their muse. The relief named after her was reconstructed in the early twentieth century out of fragments scattered across several collections and is now at the Museo Chiaramonti, one of the Vatican Museums in Rome. In Gradiva, Diana Al-Hadid has chosen a mythological figure whose history is marked by several phases of recollection, oblivion, and repeated re-invention. She may also be read as a metaphor of Al-Hadid’s approach to art. Layer by layer, she alters and reimagines her motifs, allowing the passage of time to imprint its trace in the accumulated strata—as the title of the ensemble also suggests: the Parcae or Fates, the goddesses of destiny, symbolize the future, present, and past.

Invited by the board of the Secession

An artist’s book to be published in conjunction with the exhibition will take the form of a notebook containing reference pictures, sketches, and photographs tracing the genesis of the works on display. 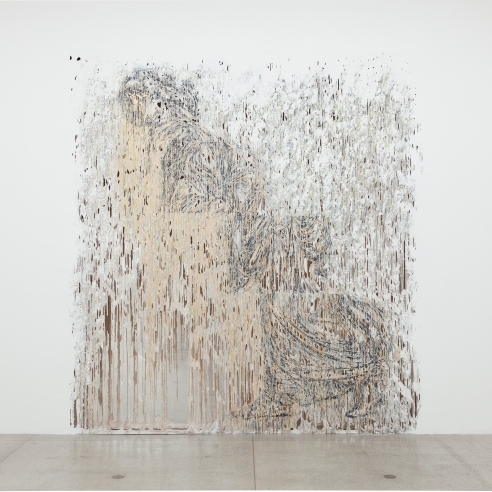 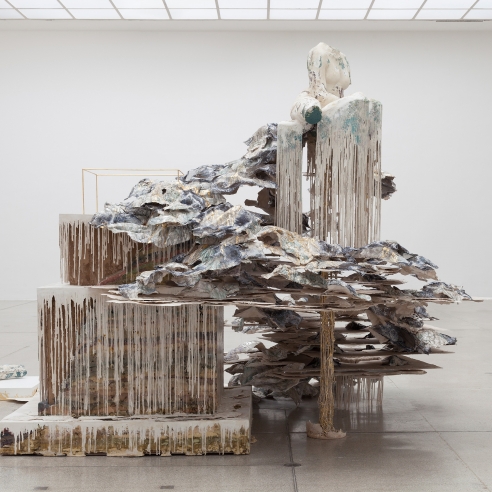 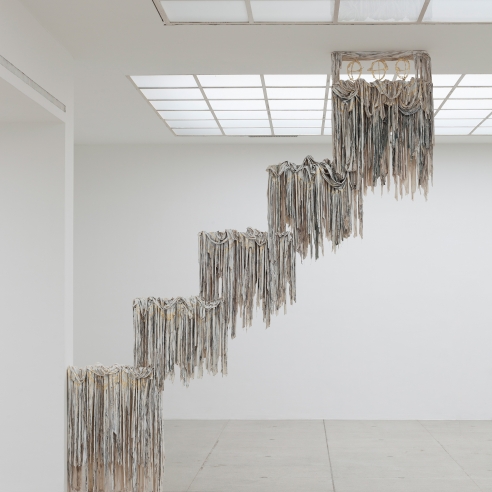 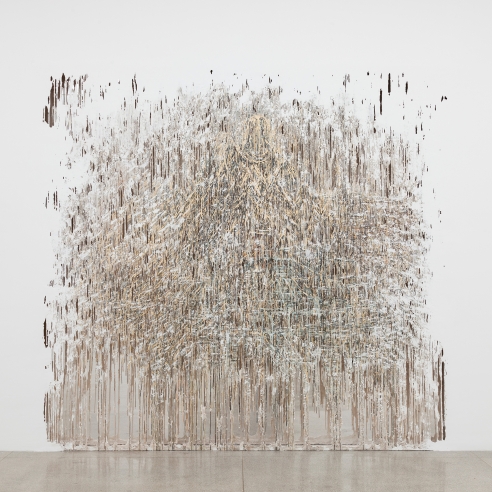 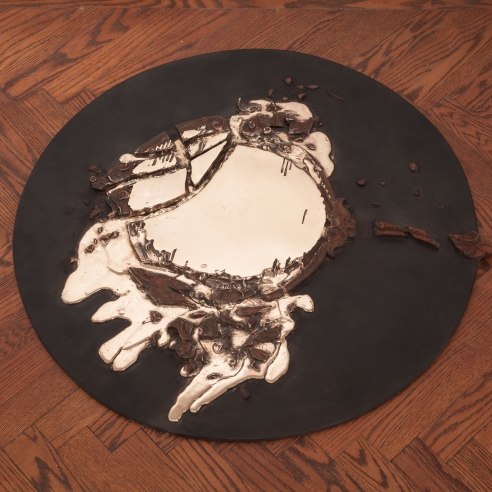 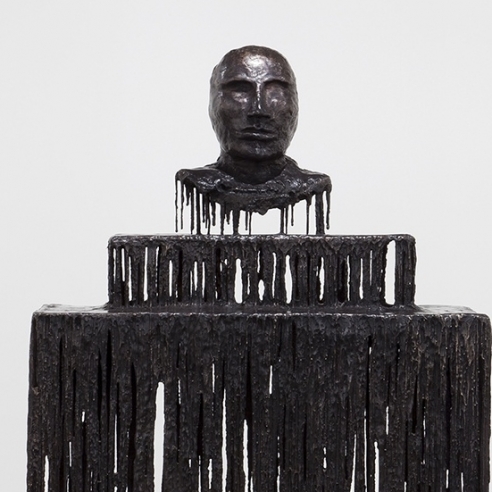 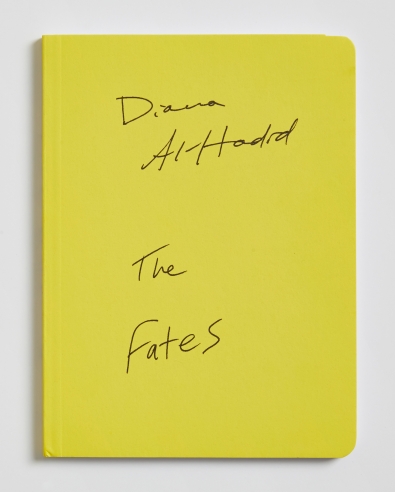